To-date, the projects I’ve discussed on this blog have been successful, to one extent or another.

It seems disingenuous to have written an entire entry about the necessity of being wrong – of screwing it up from time to time – while also never telling you about the times that I have screwed up. Had something go awry or unplanned. “Gang aft agley,” to use the words of Burns.

Even the greatest of us can’t be perfect all the time – though I try my hardest.

So let’s talk about salt.

If this was all I had to eat, I’d probably sail somewhere warm and murder a bunch of monks too.

Numerous texts about the Viking era make references to salt of some type or another. This is hardly surprising; salt is generally believed to have been an essential commodity in the ancient world. Hell, it’s pretty essential right now. In the time before refrigeration, salt (combined with other processing methods – typically drying) was really the only way to preserve  highly-perishable meats (and other foods). The average person in the Middle Ages probably didn’t eat a lot of meat as a result of that – it had to be prepared fresh, or else salted beyond most reasonable recognition and used in some other type of dish. This probably explains why roasted meats were often A Big Deal in ancient feasts – having access to fresh meat meant you were wealthy enough to afford it.

But “salt” is a pretty generic term that can be applied to countless products. When we use it, we tend to refer to the familiar processed purified sodium chloride table salt that we use with frequency. The scientific meaning of salt encompasses far more than just white cubes of flavor enhancement; virtually any solid product of a neutralization reaction is a “salt” of some kind.

I’ve also discussed the error of bringing pre-conceived notions into historical research. OK, so we know “salt” generally means some kind of stable ion-anionic compound. That’s probably good enough to figure out what they meant when they talked about “salt” in the Viking age, right?

Maybe not. From a 15th century manuscript in Dublin (23 D 43 from the Royal Irish Academy), we have the Old Icelandic Medical Miscellany, and its recipe for something called “Lord’s Salt:”

One shall take cloves and mace, cardamom, pepper, cinnamon, ginger an equal weight of each except cinnamon, of which there shall be just as much as of all the others, and as much baked bread as all that has been said above. And he shall cut it all together and grind it in strong vinegar; and put it in a cask. That is their salt and it is good for half a year.

Wait, what? There’s no mention of anything salt-like in here – just vinegar, bread, and spices.

Remember that our knowledge of ancient methodology is conveyed through translation. At some point, a translator simply has to decide what word best fits the “sense” of what he’s reading. Since salt was used primarily as a preservative in the ancient world (and not a seasoning as is its primary use today), it is conceivable that the word we’re translating as “salt” might mean something more akin to “preservative.”

Indeed, that Lord’s Salt is just a pickling solution – but it would accomplish the goal of preserving whatever went into it. We can see how something as simple as “salt” can be far more nuanced than the translation would lead us to believe.

Pliny documents several kinds of salt, some of which sound like our modern sea salt and others of which sound like other types of mineral salt. He even notes that some people make salt by pouring seawater over burning wood and coals. These various processing methods would all introduce different minerals to the “salt,” which would account for the variety that he documents. Contamination with vegetative matter (i.e. burned wood) would create an alkaline salt with a probably significant nitrate or nitrite content. Some methods involve boiling down seawater over fires; this would likely add a smoky character to the salt, as well as some lighter vegetative contamination.

1000 years from now, some poor bastard is going to do half-assed translation work and make the most interesting ham ever known.

So what did the Vikings probably do? Well, there are several words related to salt in Old Norse:

“Salt-burning” is an interesting concept. One can see how pouring seawater over burning wood may be thought of as “salt-burning.” “Salt-kettle” makes me think that a kettle may be involved, and Pliny does refer to salt-pans used to boil water – so that’s possible. It may also be a pot to hold something as it burns into salt.

The “salt-beach” is interesting because it has a possible connection to kelp-burning, which has been practiced in Scotland for a while and was allegedly practiced in Iceland as well. This too would make sense as “salt-burning,” and we know that plant ashes contain a variety of salt compounds – so it could actually have a preservative effect. I imagine Icelanders building fires on the shores where they’ve collected kelp to dry, and burning the dried kelp to ash. Totally plausible.

So I drilled down and decided to focus on the kelp-burning thing, because it sounded the most wonky and interesting to me. There’s a company in northwest Iceland that harvests kelp for commercial use, called Thorvin; I got my hands on some of their animal-feed meal (I’m going to burn the hell out of it, so who cares if it’s for people or animals), and set to work.

Burning kelp meal is difficult. I started off by trying to burn it in a heap, but the lack of proper airflow in the middle of a kelp pile stopped that from being viable. A friend of mine suggested that we “burn it like food” in a cast-iron pot. Brilliant! That even fits the “salt-kettle” model I’d mentioned before – perhaps this would be a viable method of producing salt.

I will tell you right now that blackening kelp meal smells awful. Imagine the smell of low tide – and then set it on fire. 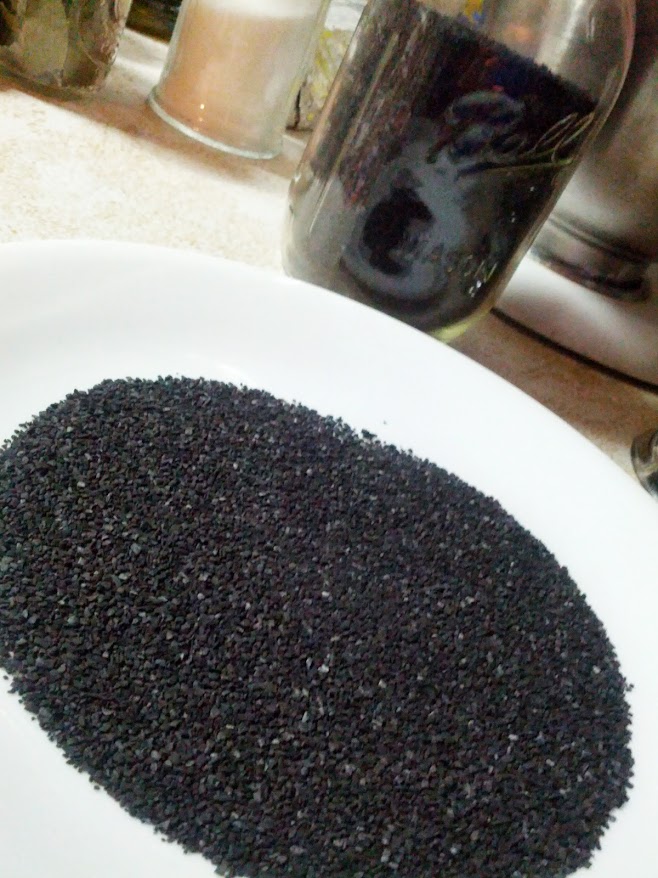 Holy shit, it’s almost like I know what I’m doing.

As I said, pyrolysed vegetable matter should provide an appreciable nitrite or nitrate content, so this should hypothetically cure anything to which I apply it. The stuff tasted something like burned ocean – a bit salty, a bit smoky, and a bit gritty. Awesome! This should work!

I ran a little experiment: 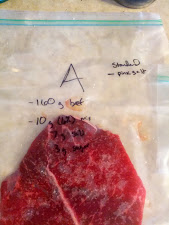 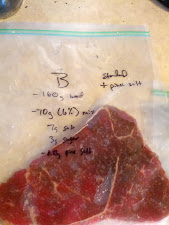 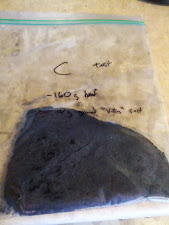 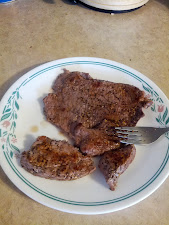 This is what I found for all three products: 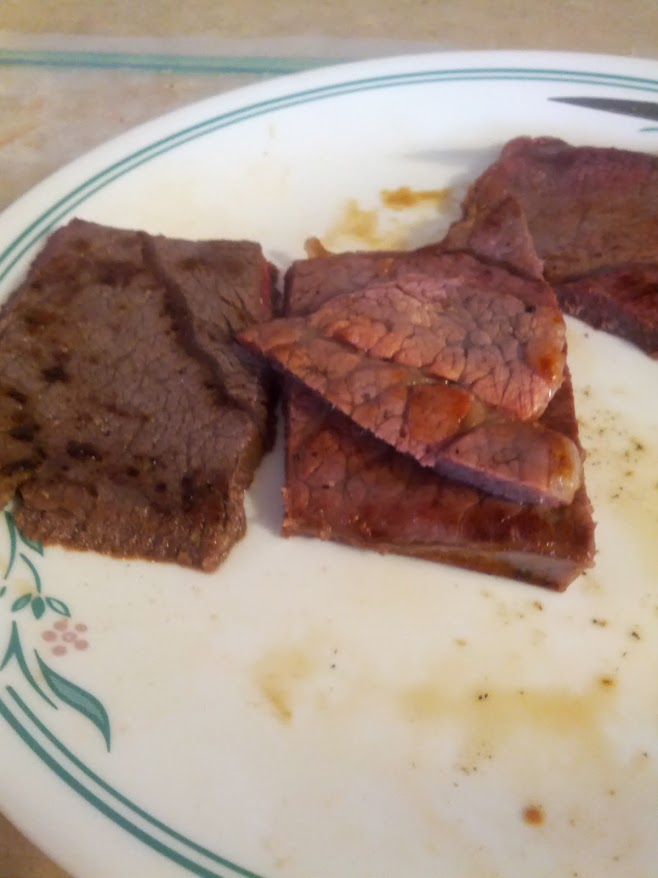 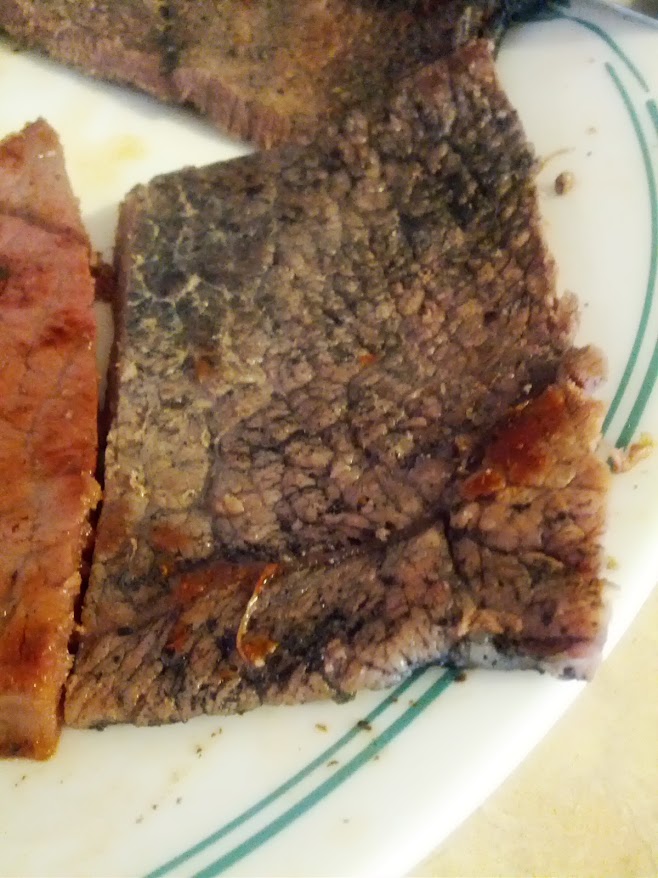 The first pictures shows A and B from left to right. You can see that A simply looks like cooked steak (albeit salty and with a more turgid texture), while B has the distinct pink hue of a cured red meat product (with a salty, tangy flavor and turgid texture).

The second picture shows the test, C. The burned kelp.

It tasted like a plain steak. Nice soft texture, no saltiness. Nothing. Just like the control un-treated steak.

In other words, it didn’t work.

I thought this would make a “salt” much more akin to something I’m used to today, and all of my knowledge indicated to me that it was a likely outcome.

Now, a little more elaboration on what I learned from the experiment itself. The burned kelp, when it was applied to the beef, formed a sort of “coating” rather akin to a very thin latex paint. Parts of it would come away together. Interesting. It appears that the burned kelp “sealed” the steak, preventing any water escape – and presumably preventing any mineral diffusion. Upon further analysis, this isn’t actually that surprising, because the way in which we burned the kelp is quite similar to the way in which tar is produced. We effectively removed the moisture content and left behind incompletely-combusted carbon compounds – likely some various hydrocarbons.

Creosote is a similar byproduct of burning vegetative matter, and is the portion of smoke that is responsible for preserving meat. Creosote can build up because of the incomplete combustion of organic matter – much like we did with the cast iron pot.

And creosote was once used to preserve meat. It wouldn’t salt the meat – rather, it would “seal” it and prevent anything external from spoiling it.

This is why I promote the necessity of failure: because it simply shows us a different way of thinking about our ideas. As I look over my failed experiment – results that did not go as I thought they would – I realize that I’ve only just begun to poke at this.

Perhaps this is just another form of “salt” that would have been used – a hydrocarbon-heavy coating that would extend the “fresh” shelf-life of the meat in question, an early method of creosote production that was lost or superseded.

Perhaps I need to figure out a way to combust the kelp – burn it like fuel until I’ve got potash, and use that.

And there are other potential avenues for me to investigate still.

This is how science works. We observe, we hypothesize, we test, we re-design. Even in failing, we gain useful information that we can use to refine our positions – and often, failure helps us to realize that we’ve been stubbornly persisting on the wrong track for some time.

Plus, this gives me a great excuse to over-engineer some contraption to better light shit on fire. Who doesn’t love that?

8 comments on “Back to the Drawing Board”